She chases me, my country. She lives deep inside my breastbone, and yet, I leave her. I cross the same ocean over and over to retreat inside my comfortable cage. I rest there, far from my complicated family, far from my father’s grave, far from the village containing people who remember my grandmother walking through the fields to have tea with her beau.

She pulls me home, though, my country. She pulls me back to stand on the hill where I watched my father cut barley under the midday sun all the way through to the harvest moon. The field where I ran through stubble with his flask of tea and still-warm lemon roly poly and hoped he’d let me up into the cab with him and steer the combine while he ate.

We couldn’t speak for the noise of the cutting bar, but it was enough to stand beside him, proud to be useful, hoping he would forget I was there and I could stay all afternoon watching the muscles on the back of his arm move along the freckles.

Every year I go home and stand on that hill, watching the wind move through the barley; someone else’s barley now; someone else’s daughter running through stubble with a hopeful flask of tea.

He’s under the earth now, my father, enclosed in the land he farmed, under the grass his mother used to walk on to visit my grandfather on Sunday afternoons when sometimes there was honey for tea.

One day, I’m coming home for good to lie down in that same earth, that same slope of land, sun warmed and moon lit, to join the ones who were gathered in before me.

Until then, I’ll know it’s there. I can feel it from here, three thousand miles away; the tang of newly-cut barley, the scratch of stubble on my calves, lemon cake crumbs on my tongue, and my father’s low baritone, registering deep behind my breastbone. 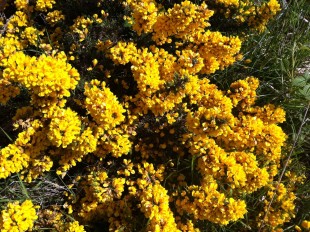