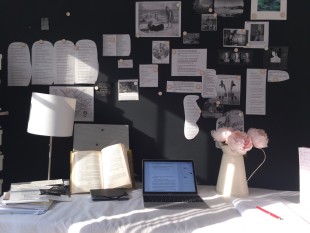 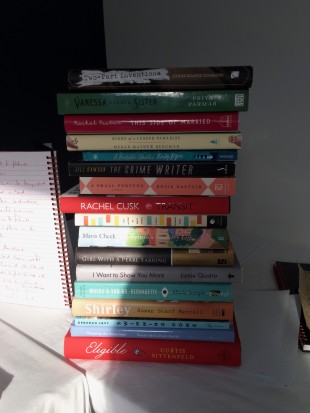 My BookEnds mentor Meg Wolitzer helped me with my manuscript A Tender Hate, which I had only been working on seriously for about a year when I applied. The manuscript was full of holes, and by the time I got to the second half of the BookEnds fellowship and began my work with Meg, my podmates had helped point out where the holes were and how to fill them with missing scenes. When I first met with Meg after she’d read my manuscript, I knew what I wanted to say, but didn’t know when to reveal which information.

Meg saw the structure from the first. “Well, this novel is in three parts,” she said. “The first part can end with this sentence here, the second part can be the big flashback and the third can be back in the present where the first part left off.” It was as if she had taken me to The Container Store and picked out three perfectly-sized and -shaped boxes, and sent me home to fill each one with what I already owned. I left that January meeting filled with energy. It was a sorting exercise. I could do this.

I had been longing for a structure, an architecture, a template. Meg gave it to me, as if she had intuited what the manuscript needed.

Indeed, Caroline “Coco” Picard, whose BookEnds novel The Healing Circle is forthcoming with Red Hen Press in 2022, said this: “Meg has an uncanny ability to identify the core of a book’s concerns, and how to give those concerns their due space. Working with Meg, I not only realized my propensity to conceal that murky territory but also gained the courage to make it apparent.”

I totally agree that Meg has “uncanny ability” as a mentor to novelists. She plucked a phrase from the middle of my novel and turned it into the title, A Tender Hate—and that title, it turns out, was the essence of the novel, the “core of the book’s concerns.”

Journalist Colleen Curry, who worked with Meg on her novel Married Women through the early months of the pandemic, said these were the nuggets from Meg that would stay with her: “Cut every part that isn’t the reader’s favorite, never stray too far for too long from what the book is really about; there should be something on every single page that delights the reader.” With these simple phrases, Meg sharpened Colleen’s eye toward her own work and reminded her of the purpose of the task.Colleen went on: “Meg’s line edits are so insightful, and her generosity in helping other writers is a model for all of us.”

When Stephanie Gangi came to speak to the BookEnds alums group about freelance editing, she said that what she looked for in an editor was someone to stand shoulder to shoulder, nose to the grindstone in the editing. Over many months and through multiple drafts, this was what Meg did for me. She was shoulder to shoulder with me, nose to the grindstone, generously inhabiting my manuscript and my characters along with me. In the last couple of weeks of my BookEnds fellowship, before the manuscript was submitted for  the agent read, I was in Scotland, so Meg and I were working at a 5-hour time difference which she accommodated without missing a beat. I would send the manuscript to Meg at my bedtime and when I woke up, there it would be in my inbox with a full edit.

At the last minute, Meg saw that there was an important missing scene. I had about half an hour before I was supposed to press “send” to Susie. I would normally mull over a new scene for days, writing drafts long, then reducing, sitting with it until it revealed to me what it wanted to say, but because Meg assumed I could write a whole new scene in minutes, it made me rise to her expectations. I wrote it in minutes and inserted it into its place. Shoulder to shoulder, indeed.

“It’s Meg’s perception of how fiction works in the minds of readers that left the deepest impression on me,” Colleen said. “She understands why readers come to fiction in the first place, and what makes them sink into a book. Her lifelong study and deep love of stories remind me why I write.”

What a gift, Coco and Colleen and I agreed, to have had Meg’s brain and heart laser-focused on our work.

Meg Wolitzer on writing and editing

“Cut every part that isn’t the reader’s favorite, never stray too far for too long from what the book is really about; there should be something on every single page that delights the reader.”